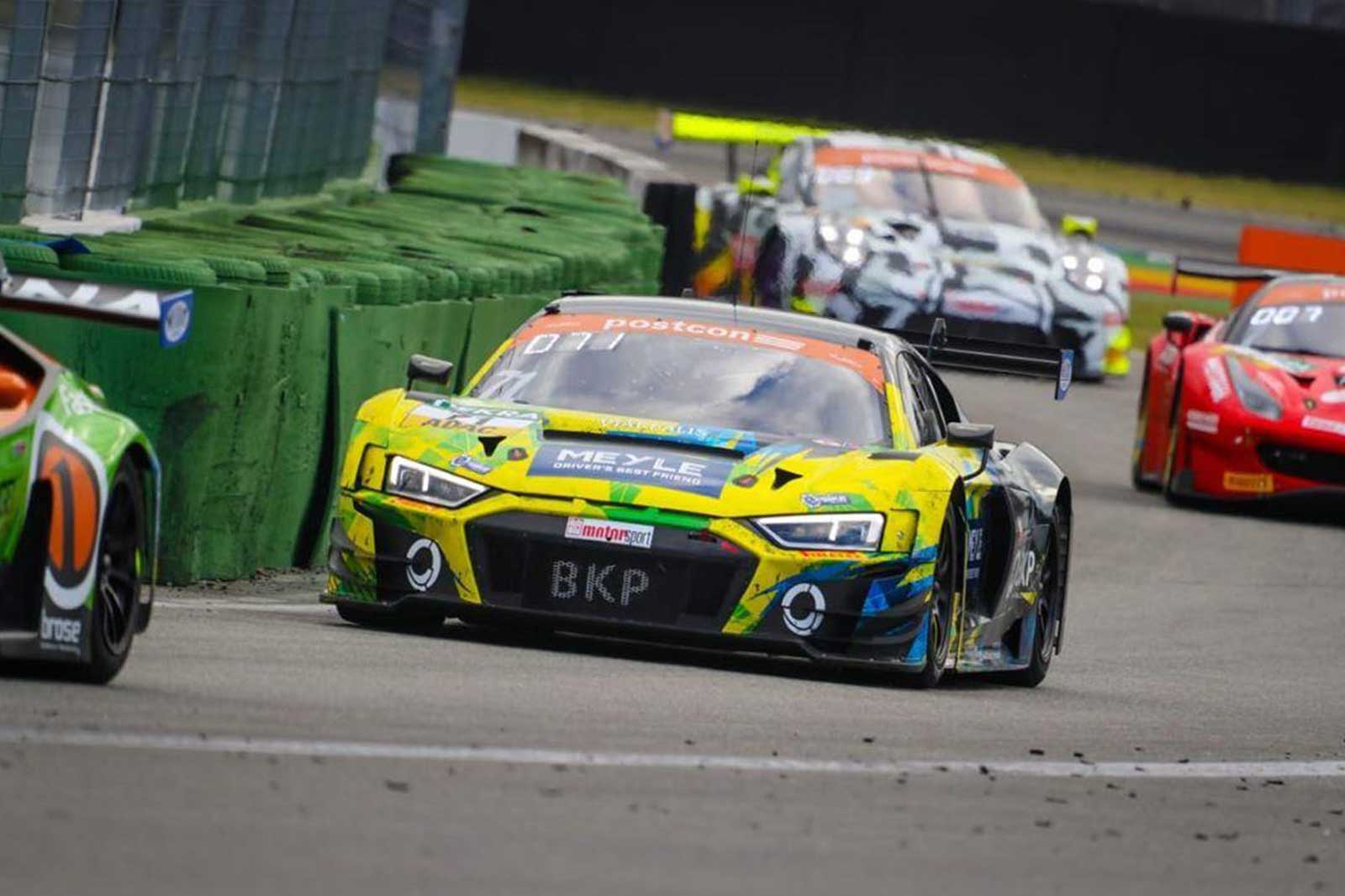 Will Tregurtha proved his pace and progress in the hugely-competitive ADAC GT Masters during the penultimate event of the 2019 season at Hockenheim in Germany over the weekend, 14th/15th September, with a fantastic top-eight finish.

As well as marking a real breakthrough for the Bedford-based driver and the Meyle supported T3 Motorsport squad, the result in race one on Saturday showcased a terrific team performance as the No.71 Audi R8 LMS GT3 gained no fewer than nine places on its starting position.

Enlighten-backed Tregurtha said: “I’m just delighted for the team and sponsors to be honest. They have put so much effort into this season and to be able to give them a points finish – and a top 10 – is just fantastic.

“This is a new team, they’ve taken the decision to field two young 19-year-old drivers in Maximilian Paul and myself and compete in arguably the toughest GT3 championship in Europe. The grid is jam-packed with 30-plus cars driven by top-class professional drivers. So it’s a real learning curve for us but I’m just so happy that everyone’s work has been rewarded.”

Preparations for Tregurtha’s fourth outing in ADAC GT Masters went well and heading into qualifying hopes were high for a competitive showing. Paul took the opening qualifying session on Saturday and posted the 18th fastest time, out of 31 cars, with a time of 1m39.154 seconds, just half a second shy of the top five.

Beginning race one from an elevated 17th place due to a penalty for a rival, the action was swiftly red flagged after just three corners when a multi-car incident resulted in a number of damaged cars becoming stranded.

Following a reasonable delay, the action resumed behind the Safety Car with Paul in 14th spot and he maintained position initially before then steadily moving up the order. Running inside the top 12 as the pit-stop window neared, the T3 driver remained on track when the first stops were made and he moved up into the top 10 with just under half an hour to go.

Duly pitting to hand over the Audi R8 to Tregurtha, the British ace maintained the placing after the race order settled and lapped impressively quickly in pursuit of his, and the team’s, first points finish in the ADAC GT Masters.

Climbing into ninth place with 10 minutes left on the clock, Tregurtha closed on the No.33 Team ISR Audi of Frank Stippler and at the chequered flag just 0.3 seconds separated them. Post-race, a penalty for the No.31 HCB-Rutronik Racing Audi moved Tregurtha up into a season-best eighth, third in the Junior class.

Sunday morning’s qualifying session was contested by Tregurtha and he produced the 18th best time with a lap of 1m39.052 seconds, matching the performance of team-mate Paul the day prior to lap within just half a second of the top five.

Making a fantastic start to race two of the weekend, the British driver gained several positions to run as high as 14th place as the field headed through Turn Two but red flags were then produced as a result of a hefty excursion for the No.77 Corvette at the first corner.

Following a delay of around 20 minutes the race got back underway behind the Safety Car, with just over three quarters of an hour on the clock, and Tregurtha held 16th place. When the action proper began he held station, then moved into the top 15 with around 35 minutes to go before assuming 14th when the No.26 Audi was black flagged for its part in the first corner incident.

Tregurtha continued to improve his pace and also climbed into 13th position, third in the Junior class, when Marco Mapelli’s Lamborghini served a penalty. Staying on track as the early pit-stops took place, Tregurtha climbed to the cusp of the top 10 before pitting with 25 minutes to go.

When the race order settled, Paul held 17th position behind the RWT Racing Corvette but a second pit-stop due to a puncture with around 10 minutes to go meant a disappointing finish of 25th place overall, which didn’t tell the true story of the duo’s competitiveness.