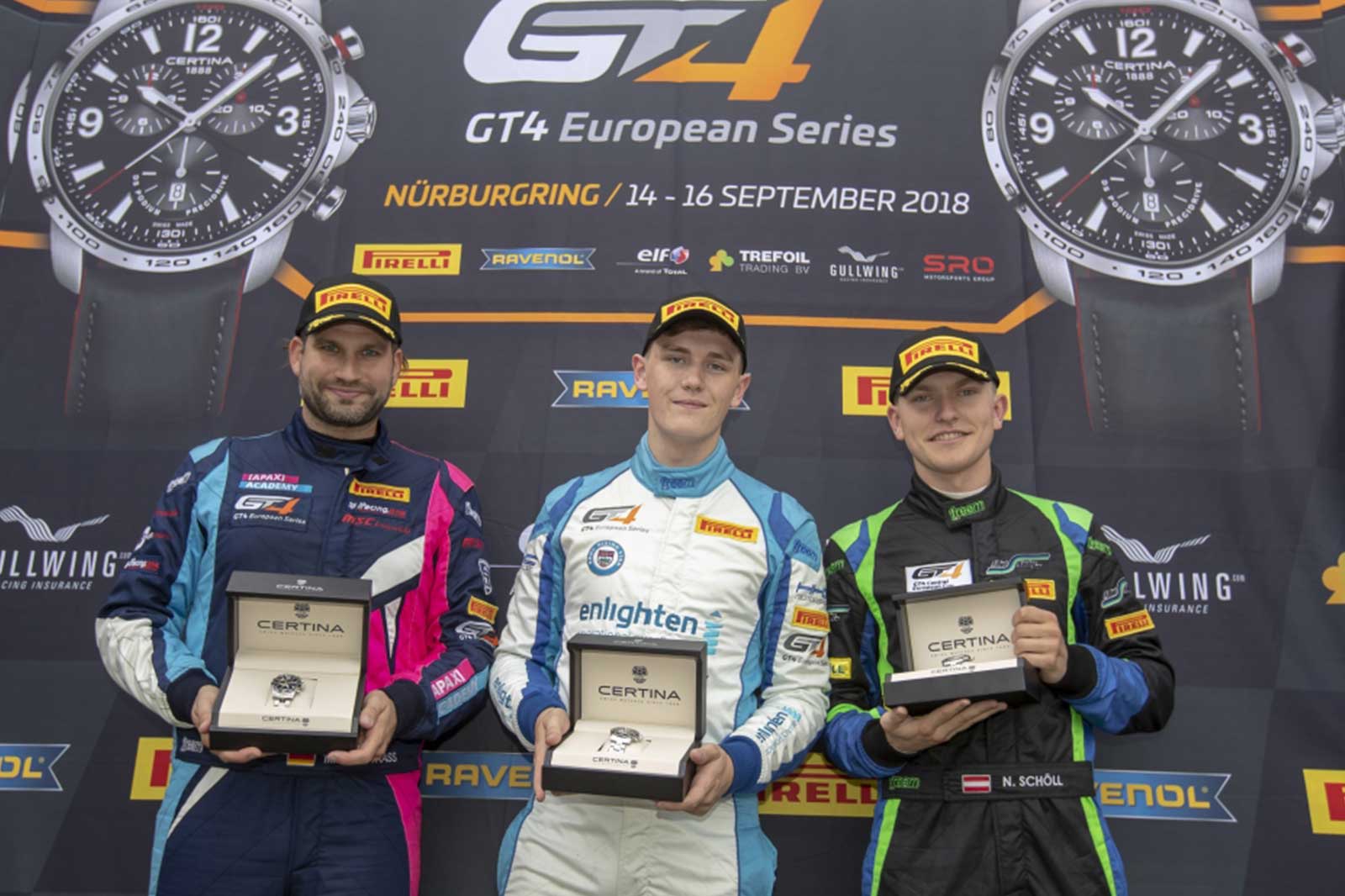 Impressive GT4 European Series challengers Will Tregurtha and Stuart Middleton had to watch their 2018 title bid, quite literally, go up in flames at Germany’s Nurburgring on Sunday, 16th September, when a dramatic car fire ended their dream of title glory.

Going into the season finale second in the standings, just two points shy of the top of the table, a strong fourth place in race one on Saturday, 15th September, set the scene for a mouth-watering final round with the HHC Motorsport team-mates tied on points with Simon Knap and Max Koebolt.

Although starting Sunday morning’s race from 17th on the grid, a long way behind their rivals, things looked increasingly positive just a couple of corners into the encounter when Middleton was able to avoid being caught-up in a collision which did account for Koebolt’s BMW.

At that point of the race, the Ginetta Driver Development Programme duo held an advantage of three points over the Audi pairing of Nicolaj Moller-Madsen and Milan Dontje but things unravelled for HHC shortly after the mid-race pit stops as a result of unseen damage sustained on lap one.

With Tregurtha running just outside the top 10, smoke began to fill the car and, soon after, flames were visible underneath the left-hand side. Managing to get back to the pitlane, Tregurtha bailed out of the Ginetta as soon as he could as marshals worked to put out the fire – extinguishing the title hopes of the 18-year-old team-mates in the process.

With Moller-Madsen and Dontje going on to end the race in fifth, and the Tregurtha and Middleton and Knap and Koebolt pairings failing to score, all three crews concluded the event tied on 143 points. Therefore, Moller-Madsen and Dontje only won the crown on countback from Tregurtha and Middleton with more wins over the course of the year than the BRDC Rising Stars, three versus two.

Will Tregurtha:
“Obviously I’m gutted, but it’s nobody’s fault and there’s nothing anyone could have done – without the contact on the first lap we would have been champions. When Stuart pitted, the car was fairly smoky. He’d radioed there was a bit of smoke but we thought it would clear and be OK. The car did start to fill with white smoke more and more, but I knew if I pitted we’d lose the championship. At one point the smoke cleared a little, so I said to the team I thought it was OK, but then the car filled with black smoke and when I looked down I could see the whole car was on fire.

“Despite everything, though, we’ve finished second in a highly competitive championship in our first year in Europe. I’m really proud of the whole team, everyone has done an amazing job. Stuart’s been an awesome team-mate again, I’ve absolutely loved it. We’ve turned up at tracks such as Misano, Nurburgring and Hungaroring with no testing, having never driven them before, and been at the front in qualifying and in the races themselves. That shows how good HHC have been at setting the car up.”

Stuart Middleton:
“As a team we’re happy with everything we’ve done this year and, from my point of view, it’s been such an enjoyable season. I can’t fault any of the guys, everyone involved has done a fantastic job and Will has been a fantastic team-mate again this year. Drawing on points with two other teams, and two other manufacturers, is pretty crazy really. We’ve been up against some of the best teams in Europe and we’ve taken the fight to them with our Ginetta, we have to be happy about that.

“The contact at the start was quite a significant hit, I thought the tow-link or something might have been broken but the car felt OK. I stayed well clear on the right side of the accident, but one of the cars trying to jump out of the way clattered into us. After the race we realised it bent the exhaust up, and that’s what caused the fire in the end on the bodywork.”

Milton Keynes racer Tregurtha certainly made the perfect start in qualifying, scorching to the race one pole position with a lap of 2m05.123s (147.8 km/h). Although edged back to fourth at the start of Saturday’s contest, the Enlighten and Spine Optics backed driver remained on track as the majority of others served their mandatory pit-stops halfway through the race and climbed into second with a couple of blistering laps in clear air before he pitted with just over 25 minutes to go.

After joining the track for his stint, Middleton set about closing down chief championship rival Koebolt and with 15 minutes to go they were nose-to-tail. Shadowing the BMW and searching every which way for a potential overtaking opportunity, the battle raged all the way to the finish with Ashington driver Middleton moving ahead into fourth with just two laps to go.

Meaning the two crews were tied on points going into Sunday’s finale, the HHC drivers really had it all to do from 17th overall on the grid – second qualifying not having worked in their favour – and Middleton made a good start.

Able to avoid the dramatic multi-car tangle at Turn Two, in which Koebolt was caught-up, Middleton had to run off track on the outside in avoidance and although sustaining contact to the left-side of the Ginetta, all seemed OK for the North East Caravans, Steel & Jelly and Spine Optics-backed racer.

After the ensuing Safety Car period, Middleton held 10th position and sixth in the Silver class when racing resumed 20 minutes later and, at that juncture, he and Tregurtha had a three-point lead in the standings from Audi duo Moller-Madsen and Dontje.

Grabbing ninth overall at the last corner on lap six, Middleton then pitted at the end of lap 12 from seventh place with a couple of rival crews already having made their stops. As he handed over the No.55 car to Tregurtha, the HHC mechanics rushed to check the left-side of the Ginetta but the car soon headed back into the race with no immediate cause for concern.

Tregurtha joined the track with around 25 minutes to go and their championship dream was still intact. In the space of just a few moments, though, the HHC drivers went from being on course to claim their second back-to-back title in GT4 racing – after winning British GT4 in their debut season last year – to having the championship snatched away through no fault of their own.

Despite the justifiable disappointment, it’s been an outstanding debut season in GT4 European Series for Vice-Champions Tregurtha and Middleton who end their 2018 campaign with two race victories, three runner-up spots, a pair of fourth place finishes and another top five result.